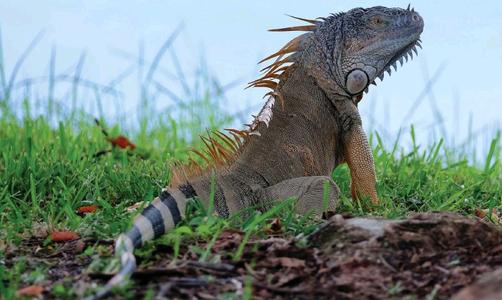 This same species, that is, the Giant Invasive or American Iguana has become widespread throughout the Caribbean, achieves high population densities in many of these areas (i.e. populations of hundreds of thousands or millions), and is credited with a range of negative impacts, including decline of native lizards, defoliation of trees and shrubs (both native and ornamental), undermining of roads and levees through burrowing activities, power outages, and interference with flight operations at airports.

Typically, GII populations have been ignored for 30– 40 years before damage becomes noticeable enough for humans to become concerned – and at which point eradication is impossible. To put your thoughts into perspective, here are a few disastrous impacts of the GII that awaits Fiji’s biodiversity, ecosystems, food security and infrastructure if the GII is not kept in check and allowed to spread to other parts of Fiji.

Florida - United States of America • The GII was first reported in Florida as nonbreeding in 1966, becoming a “cute neighbor” between the 1970’s and 1980’s. After its populations exploded in 1990’s the GII soon became a nuisance species. Land managers and property owners consider GII a pest because they have caused extensive damage to residential and commercial landscape vegetation and dig burrows (for nesting and refugia) causing erosion that undermines sidewalks, foundations, canal banks, seawalls and other infrastructure. GII problem began in the 1960’s after the reptiles escaped from captivity during hurricanes and as unwanted pets released in the wild. As of June 2007 the GII has become a widely distributed, well-established exotic species in southern Florida and is capable of reaching extreme population densities. It is estimated that GII population density can increase to 627 iguanas/km2. If each GII digs a burrow this would equate to 6.2 burrows/ hectare and considering each burrow is 6 feet deep with internal tunneling variations, weakening soil structure is inevitable. Infrastructures such as airport runways, dams and reservoirs, seawalls and hills are at risk from collapsing. At this rate of 6.2 burrows/hectare in Forida, it is estimated that to repair each burrow would cost USD 2,480/hectare. Having said this, it takes a GII roughly 2-3 days to construct a new burrow. Bursts in GII populations can happen very quickly. Firstly they mature quickly; male GII can mature within 20 months and females at about 31 months. Secondly, they produce clutch sizes of up to 49 eggs. Thirdly, the GII can live between 15 and 20 years. These characteristics make GII a highly damaging invasive alien species and can flood any suitable habitat with troops of juveniles. There is evidence that GII have been observed burrowing in canals, levees, dikes and along seawalls in southern Florida. There is evidence that GII have begun to inhabit basic traffic and air corridors. Specifically the GII may also become airplane collision hazards on airport runways at the Homestead Air Reserve Base, and other airports around Miami and Tampa, as they have in Puerto Rico. In the absence of mammalian predators and niche competitors, the GII problem will become very apparent.

Puerto Rico • The GII, native to Central and South America, was introduced to Puerto Rico in the 1970’s through the pet trade. Since its introduction, this species has become established and widespread around the main island, smaller islands and keys. In several locations in Puerto Rico this species has become abundant possibly due to increased habitat availability and the absence of natural predators. The GII adults are mostly herbivorous, but occasional predation on bird eggs, chicks, invertebrates, small mammals and carrion have been reported. The GII population monitoring in Puerto Rico in 2009 revealed that these species were extremely abundant at both sites surveyed. At the peak of the breeding season, a maximum of 119 GII/ha were observed in Parque Lineal, while 223 GII/ ha were observed at Canal Blasina. A two month study was conducted to assess the potential of GII as an airstrike hazard at Luis Munoz Marin International Airport (SJU). The study showed a total of 6 GII incursions caused operations to be halted in portions of the SJU. Body weight comparisons between adult GII and other known aircraft collisions hazards indicated that GII represents a serious airstrike; they rank in the same damaging category as ducks, pelicans and eagles. In the Northeastern part of Puerto Rico, GII nesting activity has severely affected the main road to a nature reserve called Las Cabezas de San Juan or CSJNR. Road repair cost fluctuated between USD4,000 and USD5,000 annually over the past 6 years since 2001. The plant nursery at CSJNR loses over a 1,000 young trees due to GII herbivory. The foraging activity on ecosystems and biodiversity has been observed in some sites in Puerta Rico where the GII was identified as the source causing mortality on the black mangrove (Laguncularia racemosa) at the San Juan Bay Estuary. Local agriculture in Puerto Rico has also been affected by GII damaging and destroying crops. In the southeastern town of Maunabo, Puerto Rico – yams (Dioscorea sp.) and Dalo ni Tana (Xanthosoma sp.) have been severely affected by foraging activity of GII. Similarly in the South, pumpkin and melon plants have been also affected.

What this means for Fiji if the GII is allowed to spread? Given the nature of GII to successfully enter, establish and spread in favorable habitats of Fiji, the population of newly colonies will increase exponentially in the next 20 to 30 years. Combined with the fact that there are no known predators to hunt the GII and the fact that there is an abundance of food sources around, the GII will surely multiply into larger numbers to the point it will be difficult to manage. Agricultural crops are at risk. The GII foraging activity will further stress food security for sustainable agriculture and impact livelihoods of primary producers in Fiji. Fiji’s farmers are often faced with challenges such as pests and diseases, changes in weather and climates, natural disasters (floods, strong winds and drought) and quality issues which are recurring issues to date. The incursion of GII into their farms will add to their existing challenges. The damages experienced by developers, homeowners and government agencies due to GII infrastructure damage in Florida and Puerto Rico has cost implications beyond monetary value. If populations increase and colonies spread the burrowing activity of GII will not ease and cause weakening in infrastructure funded by Government including donors assisting in infrastructure development.

BAF proposes a smart partnership with the general public especially communities in the affected areas to cooperate with BAF and help stop the spread of GII and eradicate the pest by: • Reporting any sighting of GII to BAF on 3312512 or general enquiries short code - 5994 or Giant Invasive Iguana (GII) short code – 5995. Alternatively email info@baf.com.fj or visit the BAF website at www.baf.com.fj Reporting to BAF if you notice any illegal movement of GII and/or its eggs Not consuming GII meat and not attempting to breed the iguana

The Giant Invasive Iguana (GII) or green igiguuaa¬naa, known commonly in Fiji as the American iguana (scientifically called Iguana iguana) is a large, treedwelling (arboreal) species of lizard. Native to the Central-South American and Caa¬rribibbbeean regions, it is an invasive species in Fiji. It is believed that GII was deliberately introduced to Qamea by a private, foreign landowner in 2000. GII have since become established island-wide on Qamea and Matagi. They have been found in isolated incidents on Taveuni at four widely-separated localities, but it is not yet known if one or more populations are established, if any.

In this week’s article, we look at the distribution of GII in other parts of the world and the type of damage they have inflicted on the environment and biodiversity of the surroundings they have infested as well as their effects on local communities. We also look at the importance of the Biosecurity Authority of Fiji (BAF) GII control, containment and management program and what this means for Fiji.